I downloaded the 2021 program and transferred 1 client to look around, just letting you all know that the child tax credit form is NOT updated for the new CTC amount and the advance payment info.  No clue how long it will take for them to fix this, hopefully not months into the actual tax season.

I’m guessing most of the program isn’t updated yet.  Personally, I consider it a waste of time and effort to download the program this early.

This question may qualify for the "Acme" counter!!!

I am still recuperating form last years counter, I even had finger surgery from the muffler bearing problems. 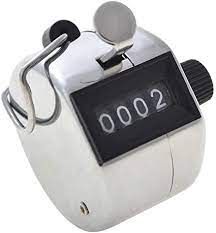 Camp - it looks like you are out of a job.  Someone else has stepped forward for the official counter job.

I am almost maybe somewhat probably for sure positive that is a Acme Turbo Counter!!

I am surprised with the supply chain issues that a Turbo model is available, I would dare say that with the current run away inflation, that particular counter would retail for $19.95.

It can't be an ACME counter - it evidently was still working when it got all the way up to 2.

Primary reason that I download right at the start is to start processing Organizer's and getting them ready to Mail to my clients on January 2.  Yes I'm (not young anymore) and i still prefer to use paper to communicate with my clients some of the time, and Organizers are one of those times. (And over half of them open the package, and some of them even fill them out!)

As I noted when someone posted the some information yesterday, IRS did not issue an updated draft Form 8822 until November 4.  Many Intuit users do not understand what they are buying.   Intuit does not have couriers who carry freshly-signed tax laws from the White House to their programmer offices.  Intuit works from IRS forms and instructions.  If those aren't finalized until the end of the year or the start of the next, the program is not going to reflect changes made because of new law any faster.

Apparently the 8812 changed from a Form to a Schedule back in 2012 and I never noticed. <shrug>

The first draft of Schedule 8812 that I saw was dated July 22, 2021.  Looks like no substantive changes were made on the Nov. 4 draft, just some minor wording changes in Part II-A and Part III.  My printed copy from July has a nice big bold "stop here" on 16a that has since been removed.  When I looked at the form, er, schedule, late in the summer the instructions were not released yet and the form makes reference to both a "Line 5 Worksheet" and a "Credit Limit Worksheet A" (because a 3 page form just does not contain enough lines to calculate everything, so you need supplemental 12-line and 14-line worksheets from the instructions in order to figure this out).  It's likely that ProSeries could not program the form without seeing those worksheets which may have only been released recently (and are still only in draft form--or possibly in draft schedule).

But in any case, anyone installing the software in November has unwittingly signed up to be an Alpha tester (Beta testers are anyone who installs the software from December through February with recent COVID extensions making that more like May for federal returns, and July/August for some states this year--I can see you MD folks nodding your heads in agreement!)

Looks like I might have to add a new tab to my tax recap spreadsheet just for the 8812 calculations for the under 6, under 18, other dependent, advance amounts, phase outs, safe harbors and phase out of safe harbor so I can figure out refundable, non-refundable, repayable and non-repayable.  And there are at least three places where you might need to enter information from "Letter(s) 6419".

Your observations are priceless – too bad you are casting pearls to swine. Well, OK, that’s probably an unfair description of some subscribers. I think we should take a poll to guess the ethnic origin of the names used in the Examples of the 12-page instructions to Skidmark 8812. Roger, Tiffany, Jane, Tony, and Ivy; along with Susan and John (my daughter and her husband, although he is Jon.)

Here are the Instructions: