How is the fee structure established?

What Intuit charges YOU, or what you charge your clients?

What to charge my clients. Is there a way to do standard pricing for simpler returns and one for more complex returns, without editing each clients bill?

Just place a price on certain forms like Schedule A, Schedule E, Schedule F, etc., and the more complex returns will most likely use these forms with the added cost.

I accept that this is totally a practice preference issue, and for our practice, I don't use the billing/fee system at all.  The last thing I want is for clients to think I am charging them for monkey-punching numbers into software.  Can't abide that.  Which is why I have occult symbols scattered around the office, steam coming from hidden atomizers and haunting music wafting out of the vents.  People will only pay so much for the sausage...its the sizzle that jacks the rates.

I use those monkey-punching numbers and have the software generate an ungodly fee. Then I give the client a nice discount and they LOVE DISCOUNTS. I have used both methods and they all potentially generate a discussion with the client.

The answer to the original question is that I get to charge more here in the San Francisco Area, then I would in the small coastal towns of Northern CA or in the area you might live in. YOU need to decide what YOUR costs are and what YOUR time is worth. There is no universal schedule of fees.

Tax Tools has a possible tool (one of many) that you might like - The following screen is part of the Tax Fee Schedule and Justifier. Overall it is a wonderful piece of software, but I have never used this particular tool. 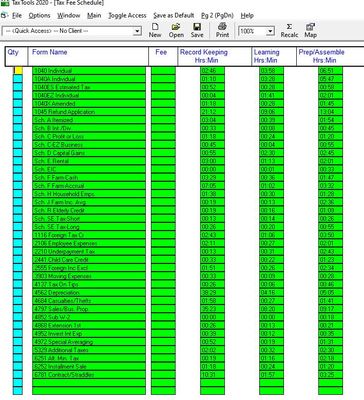 I also do as George does, as in my area it all about discounts

Happy day....I confess to telling prospective clients that, as an old-time Washington DC firm, our rates start at $4 million, and we discount down from there.  I also inform them that our fee includes a free theoretical toilet seat and a custom-imagined wrench that was surplus from the space shuttle days, both valued at well over $20,000.

@Lord Happy You emoji is interesting. Are we supposed to be able to read shorthand, or is it read between the lines or did you really lose a finger?

A long, long time ago, when the grass was greener, the sun more sunny and the water more wet, there was a boy named Jerry.  And as the legend goes, when Jerry was 5 years old or so, he and his older brother were cutting wood out in the yard and through a possibly freak accident with an axe, a portion of the middle finger was lopped off.  After a fair amount of commotion and fuss, and this being in the olden days, the finger could not be re-attached, although the legend is silent as to whether it was ever found or if it indeed became a snack for a passing raven.

But time passed as it does, and the boy grew up with the missing portion kinda...well...just always to have been missing.  Jerry did as other boys did, scampering around through those early years of life, until one day he became interested in playing guitar.  And wouldn't you know it, but the missing piece turned out to be not so missing after all, for if you know much of youngsters and their body parts, it takes a while to get them all going more or less the same direction, and at least this finger wasn't going to be part of the problem.  After a spell, it became part of an interesting solution.

The boy evolved and his guitar skills grew, and he played a bit of this and a bit of that, learning as best he could until he set off on his own and made his own way into the world.  He developed his own sound, the finger stub playing the missing note that defined the others before and aft.  Along with some friends they created a musical genre, and played the world over, plying the people with his brand of the muse.  Eventually his life gave way to the legend, and the music never stopped, and the band keeps playing on.

No legend is complete without an icon, a shape or a symbol, and even if there was one that was all-encompassing, what with a picture being worth a thousand words or so (not adjusted for inflation), sometimes just one isn't enough.  So this handprint has become part of the story of the life that was and the music that was crafted by none other than Jerry Garcia.

Thank you for that memorable story. I had an older female client that lost a finger to a recycling bin accident. Not nearly as heartwarming a story. I suggested she should get a 10% discount when she has her nails done. No dice.

Did you try using this resource: