When will the Electronic Extension Payments Be Paid?

If a client E-Files with a bank account linked and chooses to have estimated payments electronically paid, When will the FIRST Quarterly estimated tax payments be paid?

- Is it on the File date of the return?

- Or can I choose the date?

Q1 estimates can no longer be scheduled. Lacerte will ignore it.

Q2 estimates come out 6/15. There not a way to modify the payment date.

@TylorValdez1 That does not answer the question -

What happens to the first quarter. Will the program - Ignore it? - Process it at the time of filing? - ...

Q1 estimates can no longer be scheduled. Lacerte will ignore it.

@TylorValdez1 If the return was filed before 4/15, will the first quarter be schedule for 4/15?

It has been almost a week and the IRS has not debited the account. The state did debit on 4/15.

Any return that was filed by 4/15 with estimates would have been setup to debit Q1 on 4/15. The IRS is stating they are working on processing the payments and have given a 10 day turn around.

Where did the IRS say this?  Privately to the software vendors or publicly?

Good question..would be nice to have something in writing to provide to clients regarding this issue..

The IRS has stated that they are behind in withdrawing funds for first quarter estimated tax and extension payments made through auto withdrawals on or around April 15. This is why many practitioners have been notified by their clients that April payments have not been withdrawn from their accounts though the payments were properly scheduled. According to the IRS, this is not a tax software issue. It is the IRS who has been delayed in making the withdrawals from taxpayers’ accounts, and they are making the issue a priority. The problem is not just estimated taxes but all auto withdrawals made on or around April 15.

According to the IRS, there will not be any penalties for these late withdrawals, and no action is required by the taxpayers. The IRS is expected to release a Quick Alert on this topic soon. 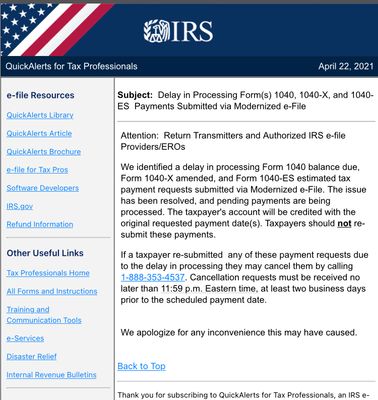