Tax Pro Center | Intuit > Tax Law and News > How Do You Optimize Wages to Maximize the 20% QBI Deduction?

The Tax Cuts and Jobs Act (TCJA) was signed into law on Dec 22, 2017, and provides sweeping tax changes for business and individual taxpayers. One of the provisions of the TCJA is to reduce the entity-level income tax rate of C corporations from a top rate of 35% to a flat rate of 21%. As an equalizing provision, a new section of the Internal Revenue Code, Sec. 199A, was created to bring the effective tax rate of sole proprietorship, S corporation and partnership owners closer to the new lower rate afforded to C corporations; possibly to a rate as low as 30%.

Sec. 199A attempts this equalization by affording the owners of flow-through entities a deduction of up to 20% of qualified business income (QBI) on the taxpayer’s 1040. This 20% deduction is subject to a number of limitations, phase-ins and phase-outs. We will focus on the language set out in Sec. 199A(b)(2) that limits the taxpayer’s potential deduction to the lesser of the following:

1) 20% of the taxpayer’s QBI with respect to the qualified trade or business.

The following are examples of the mechanics of the limitations and planning opportunities for taxpayers qualifying for the Sec. 199A QBI deduction. These examples assume a sole proprietor taxpayer filing a joint return with the owner’s QBI income as the only source of taxable income. In this case, the W-2 wages used to calculate the Sec. 199A(b)(2) limits would be wages paid to the owner’s employees since sole proprietors – as well as partners – are not permitted to pay themselves W-2 wages. They are not considered employees in the eyes of the IRS. 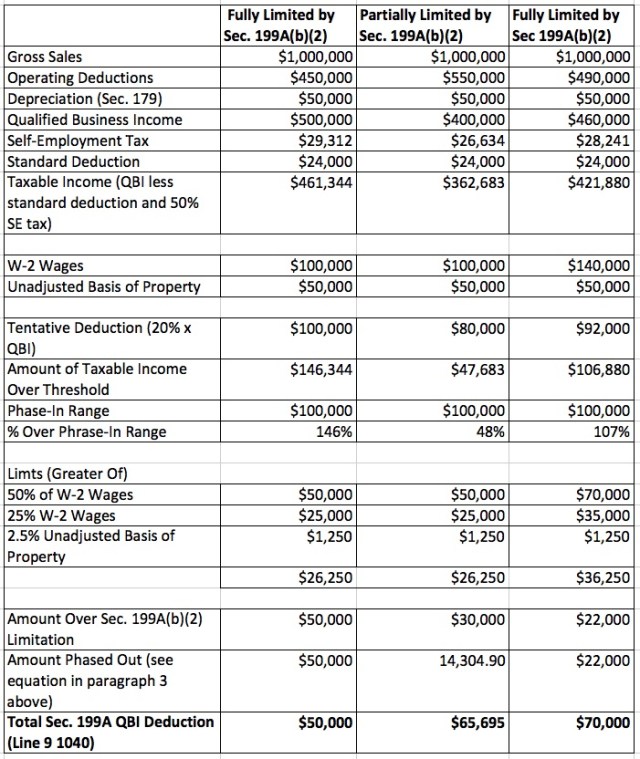 Tax accountants can help their clients weigh this compensation planning option, along with other expense bunching strategies to minimize their tax liability. Given the complexity of Sec. 199A, taxpayers need to carefully examine their tax planning strategies since increasing W-2 compensation can either increase or lower their QBI deduction based on their taxable income levels. There are also special rules for service type businesses that include more restrictive limitations and phase-outs of the QBI deduction that need to be considered during tax planning.

Sam McCraw, CPA, is a tax content analyst for Intuit® ProConnect™. He is originally from Winston-Salem, N.C., and now resides in Durham. Sam has worked in a variety of accounting, financial analysis and tax roles in technology, telecommunications, pharmaceuticals and public accounting. He is a member of the North Carolina Association of Public Accountants and the AICPA. Sam served as a military police officer in the U.S. Air Force, and deployed to Afghanistan during his active duty service. He enjoys playing golf, attending Tar Heel athletics, exploring downtown Durham and spending time with his Australian Shepherd, Ari.