How will the Tax Cuts and Jobs Act (TCJA) affect a taxpayer’s withholding? Should any changes be made? Are there new circumstances that require an examination of the allowances claimed? You bet there are, but before explaining the impact of tax reform on withholding, let’s take a step back and look at the allowances themselves.

How many allowances should a client claim? I have been asked this question frequently during my career as a CPA. Motives vary. Some are looking for a maximum refund, while others desire a larger take-home amount in their paycheck. Yet, what everyone really wants to know is just the number of allowances that they should take.

One number may be simple in concept, but getting to it is another story. On Form W-4, Employee’s Withholding Allowance Certificate, the taxpayer declares how much federal tax is to be taken out of their paycheck and applied toward their ultimate tax liability for the year. In the majority of situations, the taxpayer will use a standard deduction to reduce their taxable income, so the tax withholding table used on the W-4 will take this into account. It will not, however, take into account the number of personal and dependent allowances a taxpayer may claim on their tax return; this number must be entered by the taxpayer, and that is the one in question.

For W-4 purposes, the allowance amount equals the amount allowed on the return. For example, in tax year 2017, a personal or dependency election was worth $4,050, so for each allowance claimed on the W-4, the taxpayer’s paycheck amount would be reduced by the portion of that $4,050 that corresponded to the amount of pay periods (weekly pay would be 4,050/52).

When filling out a W-4, most of your clients probably just look at the first form that asks for the allowance number. However, there are multiple other schedules attached to the W-4 which, when filled out correctly, can ease the stress of not knowing if the liability is covered through a paycheck. Unfortunately, even payroll personnel I have spoken to do not recommend or push these additional schedules to their employees; I always assumed it was due to the calculations required.

The standard deduction is achieved simply by the employee selecting their filing status with no other information needing to be entered. However, the IRS reports that 30 percent of taxpayers itemize, so if you have clients who are part of that 30 percent, they should use the deductions worksheet. If the worksheet shows that the taxpayer should withhold more or less pay, they will be prompted to either reduce or add an allowance that is, again, just a number. The W-4 is set up in a way that uses allowances, even though they do not correspond with the number of exemptions claimed on a tax return, to determine a proper withholding amount. As a result, the personal allowances worksheet should be filled out because the taxpayer may be prompted to add or subtract an allowance if the situation calls for it.

Under the TCJA, there are no longer personal or dependent exemptions allowed on the tax return. However, this may not be a problem because the exemptions and allowances on the W-4 do not correspond to each other – a fact affirmed by the reality of the allowances still appearing on the new 2018 Form W-4 to enable taxpayers to manipulate withholdings up or down to match tax liability.

The problem arises when the taxpayer who has claimed one or more dependents in previous years does not make any adjustments to their withholding. Let’s take, for example, a family of four, married filing jointly with two children under age 16. One working spouse earns $120,000 a year and claims four allowances on the W-4. The couple owns a home and pays mortgage interest, property taxes and state taxes. Total itemized deduction are $25,000. Let’s compare 2017 data to 2018, assuming the working spouse does not change the four allowances on their W-4: 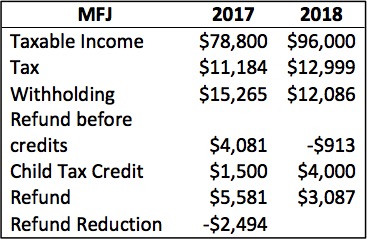 Before I mention the allowances, take a look at the jump in taxable income from 2017 to 2018 and the corresponding increase in tax liability. This is a direct result of the TCJA due to the loss of the personal and dependent exemptions. As you can also see from the table, the additional child tax credit helps alleviate the situation, but not enough in this case – and to that, we can look at the withholdings.

Clearly, the carryover of the W-4 allowances from 2017 to 2018, as many taxpayers are apt to do, has resulted in a significant decrease in the refund. This reinforces the extra time that needs to be taken to complete Form W-4 to gain an accurate assessment of withholding. Here, if the taxpayer consulted the personal allowance worksheet located in the W-4 package, they would have been prompted to enter an allowance for themselves and their spouse that would have reduced the allowances from four to two. To take that a step further, if they would have chosen to withhold based on their expected child tax credit, which they did not do in 2017, the amount of suggested allowances to take would have jumped to six. At six allowances, their refund would be much lower, but they would enjoy a greater take-home amount on payday. 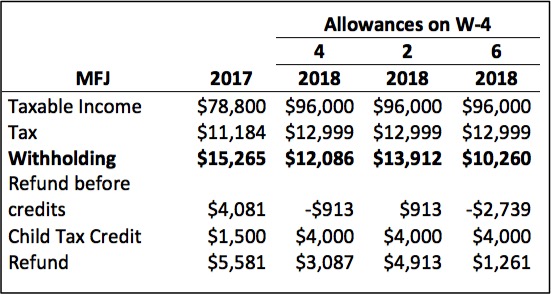 Should these changes prompt a taxpayer to reevaluate their tax liability? Yes, and thankfully, the IRS has calculation tables available. I encourage you to recommend that each client use the schedules available when completing the W-4. It can be very useful, possibly spare them from owing an astronomical amount come tax time, and most importantly, allow a taxpayer to gain control over one of the highest yearly expenses we have: federal tax.

Louis Alleva, CPA, is a manager with TurboTax Live. He is also an adjunct professor in the accounting department at Nassau Community College, and resides on Long Island, NY.