In 2016, Tennessee business owner Larry Thornton was sentenced to a year in prison and fined close to $10 million for his failure to pay over $8 million in employment taxes. Although his is a more extreme example of employment tax fraud, Thornton’s case is in line with the trend of fraud cases becoming more expensive, despite fewer cases being investigated.

In March 2017, the IRS watchdog, the Treasury Inspector General for Tax Administration, issued a report calling for a more focused strategy to deal with the shocking number of employment tax crimes. The report asserted the rate of these crimes – the willful failure to account for and deposit employment taxes – is on a steady incline. Although they say the number of employers conducting this type of fraud tripled in 17 years, there were 38 percent fewer assessments between 2010 and 2015, and fewer than 100 criminal convictions each year.

New research by QuickBooks® Payroll has revealed the almost $123 billion cost of IRS penalties for employment tax violations since 1995. The study discovered U.S. employers are paying more than $5.5 billion per year. 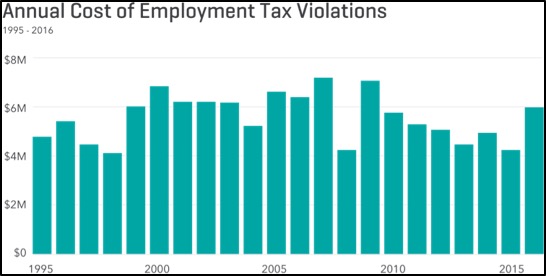 The number of tax violations assessed by the IRS has been on a consistent decline since 1995 (the first year for which data is available). Despite the spike in costs in 2016, there has been a 45 percent decrease in the total number of violations over 22 years.

On average, the annual cost of employment tax violations over the 22-year period for which data is available comes to $5,588,162,000. In recent years, this number has been trending downward, while the average cost for each violation has risen. 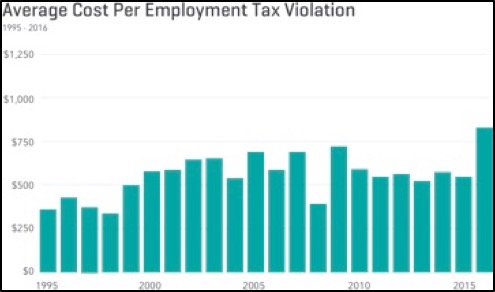 What these averages don’t reveal, however, is that some types of employment tax violations are far more costly than others. 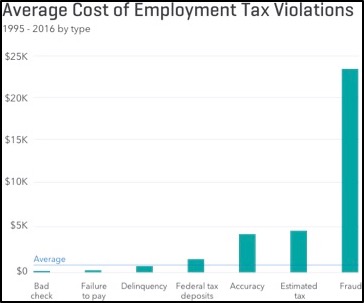 If we look more closely at employment tax fraud, we find the overall cost has trended downward over the past 11 years, while the average cost per violation has remained fairly constant, with fewer companies being prosecuted for fraud. The highest annual cost of employment tax fraud came in 2007, at $21.845 million. 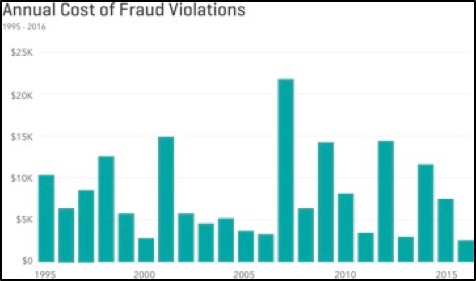 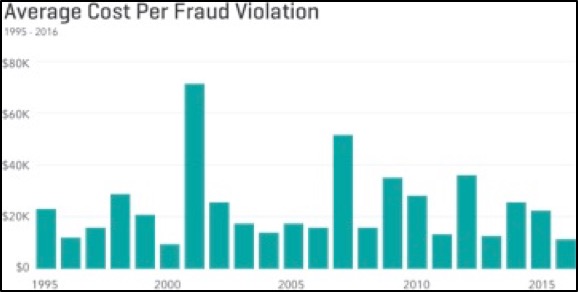 The average cost per tax estimation violation has also seen a noticeable decrease over the past 12 years for which data is available. The high point again came in 2006, at $12,666, but by 2016, the figure was down to just $2,859, on average, per violation.

It’s a similar story for tax accuracy violations. As with tax estimates, the cost of these violations appears to be on the decline – down to $3.409 million in 2016 compared to a high of $22.601 million in 2008. But at the same time, the number of violations being assessed by the IRS is trending upward. 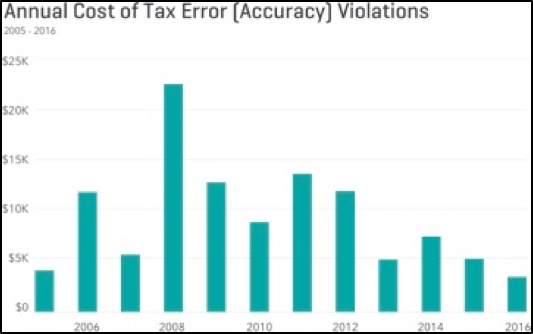 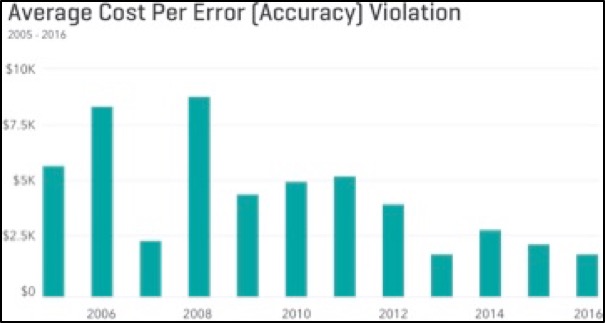 At the same time, the number of tax accuracy violations has trended up—though the 2016 figure (1,892 violations) is significantly lower than the 2012 high point of 2,964 violations.

The annual cost of federal tax deposit violations has declined somewhat since 1995, especially since 2000 when the total cost of IRS penalties reached a peak of $5.759 billion. In 2016, the cost of penalties was $3.086 billion – a 46 percent drop.

On the other hand, federal tax deposit violation costs have consistently increased since 1995—when the average per violation was $888 – to a high of $2,302 in 2016, making it the most costly year for federal tax violations on record. 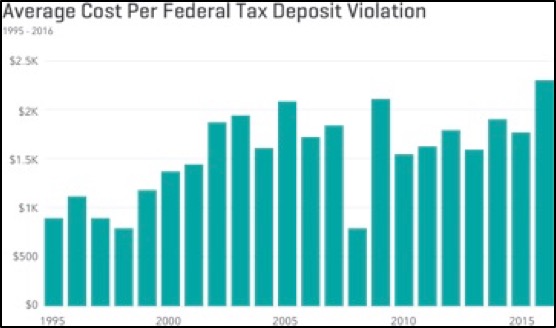 The good news for business owners is, while the cost of each federal tax deposit violation is rising, the number of violations being assessed by the IRS has dropped significantly since 1995. Back then, the IRS found 4.265 million violations compared to just 1.341 million in 2016. 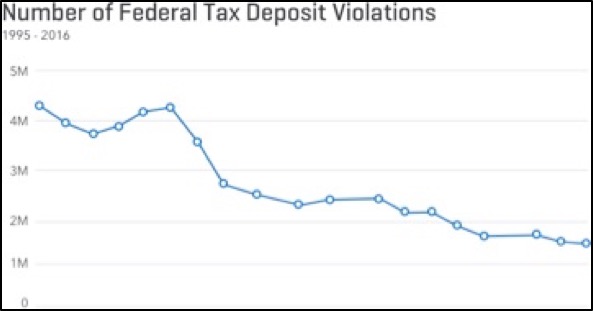 The number of penalties assessed for delinquency violations is also declining. In 1995, there were almost 2 million violations, compared to just over 1 million in 2016.

But the costs are still on the rise. Over the same period, the cost of delinquency violations has trended upwards. There was a notable spike in 2016, the second highest on record when the annual cost of IRS penalties reached $1.722 million. This was a 98 percent increase over the previous year. 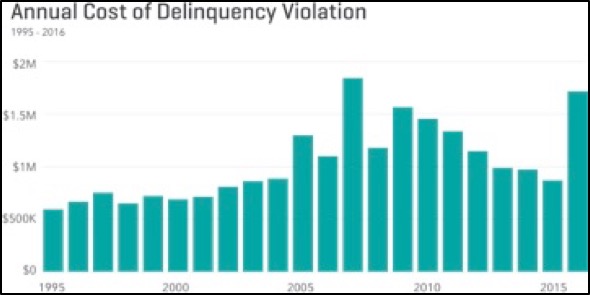 In keeping with the theme, 2016 was also a notable year for the average cost of delinquency violations. It recorded, by far, the highest average cost per violation, at $1,567. By comparison, the lowest on record was 1995, at $298 per violation. That’s a 426 percent increase! 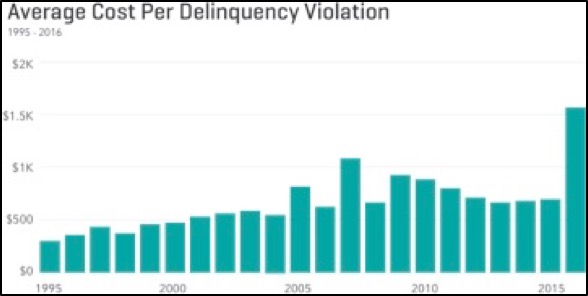 Compared to other types of employment tax violations, failure to pay penalties have a relatively low average cost, but they are the most common. For example, in 2016, the IRS assessed 3.145 million failure to pay violations compared to just 233 for fraud. The numbers are, however, on the decline – down from a high of 4.621 million in 2006.

While the overall number of failure to pay violations is decreasing, the cost is on the rise – most markedly so in the 11-year period since 2006.

The logical conclusion of having fewer, more expensive violations for failing to pay employment tax is that average costs are rising. And the data shows this to be true. 2016 saw a record high in the average cost of failure to pay violations, reaching $365 compared to the 1995 low of $84. 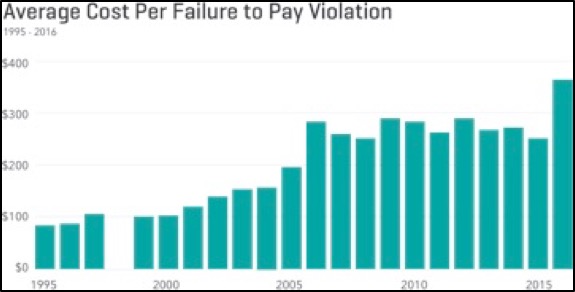 The spike in the number of bad check violations correlates with a similar rise in the overall cost of these violations, up from $4.273 million in 1995 to $59.518 million – an increase of 1,293 percent. Average costs per violation have followed suit since 2010, but with only a gradual upward trend over the entire 22-year period. 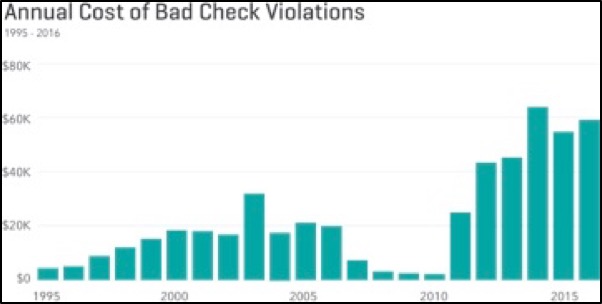 Employment Tax Errors and You

As your business clients’ tax and accounting professional, you may already help your clients report on taxes withheld and deposits made. But as their trusted advisor, you have an opportunity to make a bigger impact, helping explain the cost of employment tax violations to help them understand the importance of making these payments on time, and the risks of not doing so, so that their business doesn’t join the statistics.

Editor’s note: This article was originally published on the QuickBooks Resource Center.

Kim Harris studied journalism at Mills College. After teaching English in Thailand for three years, she returned to Boise, Idaho, to begin her career in content marketing. When she’s not telling the world about TSheets by QuickBooks, you’ll find her spending time with family and friends, learning about wine, or planning her next adventure.