The Tax Cuts and Jobs Act, signed into law on Dec. 22, 2017, overhauls the Internal Revenue Code and provides broad tax relief to workers, families and businesses of all sizes. Beginning in tax year 2018, tax rates are lowered for individual and business taxpayers, and various tax deductions and credits are changed, with individual changes sunset after 2025. A typical family of four earning $73,000 a year could receive a tax reduction of as much as $2,000.

It’s likely you have clients who invest in stocks and bonds; if so, here’s how tax reform will affect them.

Under the new law, tax rates are being reduced and tax brackets are widened for ordinary income. Please note, the 0.9 percent additional Medicare tax on high income earners has been retained.

Here is a comparison of the tax rates and brackets between prior law and new law: 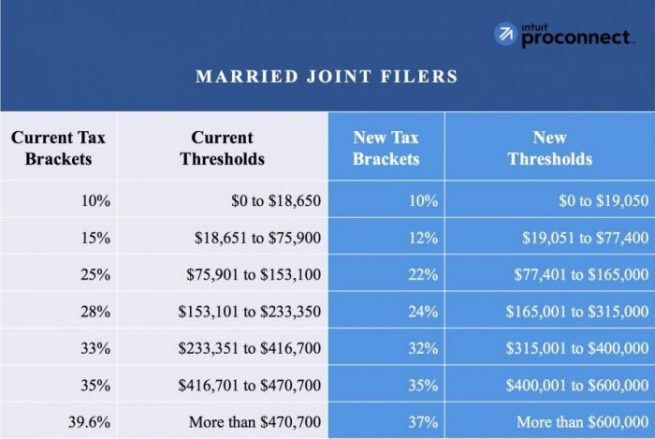 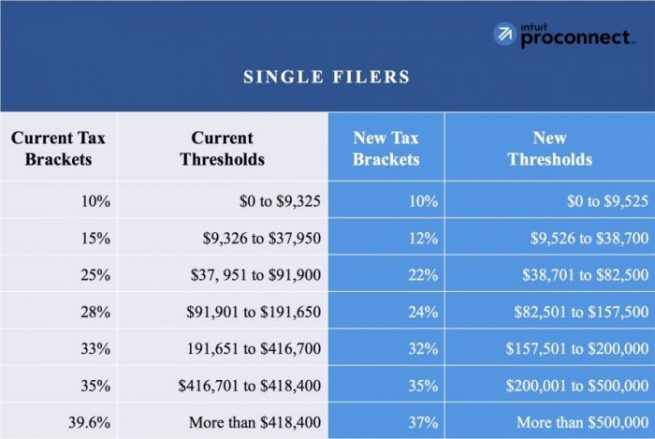 The existing preferential maximum tax rates of 0 percent, 15 percent and 20 percent, as well as the corresponding brackets on capital gains and qualified dividends, have been retained under the new law. In addition, the 3.8 percent Affordable Care Act surtax on net investment income for high-income earners is also retained. Overall, this rate structure impacts investors with taxable portfolios that generate dividends or where investment sales are being considered.

The standard deduction for investors not itemizing deductions on Schedule A has been increased to $24,000 for married filing jointly, $18,000 for head of household and $12,000 for other filing statuses. Prior to the change, about 70 percent of taxpayers took the standard deduction, so this percentage will likely rise. For those who are itemizing deductions, there is no longer a phase-out for high-income earners. However, under the new law, the personal exemption ($4,050 in 2017) for taxpayers, spouses and dependents is being eliminated.

The higher standard deduction may provide a planning opportunity for taxpayers to bunch deductions and itemize every other year to increase their deductions over a two-year period.

Under prior law, taxpayers were allowed to take an itemized deduction on Schedule A for investment expenses and job expenses that exceeded 2 percent of adjusted gross income. Beginning in 2018, this deduction has been eliminated under the new law. Consequently, fees to financial advisors will no longer be deductible. The impact of this change could be offset by the increase in the standard deduction.

The AMT ensures taxpayers are taxed at a certain, minimum rate on their income to ensure they pay their fair share. Under the new law, the exemption levels when the AMT kicks in have been increased to $109,400 for joint filers and $70,300 for unmarried taxpayers. As a result, if clients have tax-exempt interest from a private activity bond subject to AMT, less of the interest income will be taxable due to these elevated exemptions.

No Changes to Retirement Savings Incentives

Congress thought about cutting back on some of the retirement savings incentives, but decided to leave existing rules intact in the final version of the bill. Consequently, taxpayers are still able to invest tax deferred money into favorable vehicles, such as 401(k) plans, IRAs and SEP plans. This is good news for taxpayers looking to save and invest for their retirement!

One related change is that investors can no longer convert funds from a traditional IRA to a Roth IRA and later undo, or re-characterize, the conversion once it has been done.

Under new law, distributions from 529 plans can now include tuition at an elementary or secondary public, private or religious school. Distributions from an eligible K-12 institution are limited to $10,000 per year. Under prior law, taxpayers were limited to post-secondary education expenses only. Consequently, these popular 529 plans are even more attractive to families looking for a tax advantaged saving vehicle for education.

Boost Your Role as a Trusted Advisor

Tax reform present practitioners with an opportunity to better serve and coach their clients. The services can range from answering questions and educating clients to providing proactive tax planning, including running projections, looking at withholding allowances on Form W-4 and calculating 2018 estimated taxes.