Elaine Maag, an expert on tax policy and one of the authors of the report, describes the situation. “The classic idea that lawmakers may have in mind is that someone has a full-time, full-year job, and they get one earnings statement at the end of the year from that employer, and they take that to their tax return preparer and all is good. But that’s just not the reality anymore.” 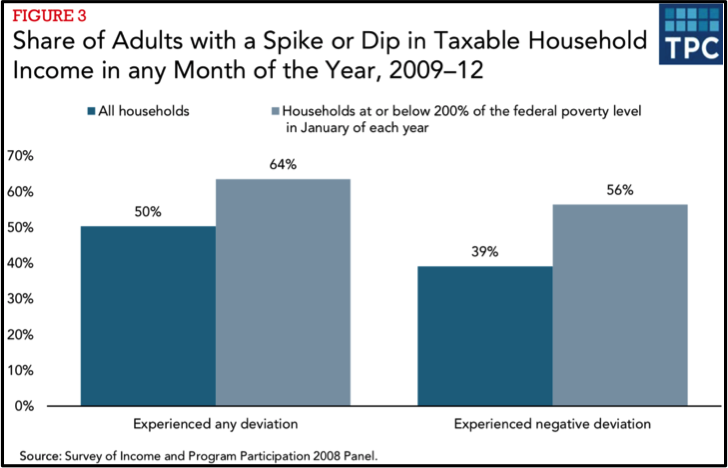 Implications for Taxes and Planning

Income swings can make it difficult to compile the information needed to file tax returns and to predict and plan for tax obligations. This may be especially true for low- and moderate-income families eligible for refundable credits such as the earned income tax credit (EITC) and child tax credit (CTC). Below is a case study from the report that illustrates a potential implication for a low-income family with two children:

Although the family still qualifies for the EITC in this example, many families will move from being eligible for some credit to being ineligible. Although millions of families receive an EITC every year, the population is not stable. Over a 10-year period, analysts found that 61 percent of EITC recipients claimed the credit for two years or less (Dowd and Horowitz 2011).

Krista Holub manages the Intuit Tax and Financial Center at https://intuittaxandfinancialcenter.com and enjoys driving research and programmatic initiatives on financial stability and tax refund savings. Her background includes experimental research and management, and she served as Program Director at the Center for Social Development at Washington University in St. Louis immediately prior to joining Intuit. She holds a Bachelor of Arts from the University of Iowa and a Master’s degree (MCRP) from the University of North Carolina, Chapel Hill.