Tax law changes are often a stand-alone proposition—tax rates go up or down, a new deduction is added to the Code, another deduction is eliminated, or a tax write-off is increased or decreased. It’s usually pretty easy to determine what the tax law change will mean for your clients. However, the Tax Cuts and Jobs Act of 2017 is a different story, with both pluses and minuses that will impact your clients in different ways. Here’s a rundown of five key changes that will likely affect the majority of your individual clients.

Before the enactment of the Tax Cuts and Jobs Act, the exemption amount was scheduled to be $4,150 for 2018. So, for a single taxpayer, the personal exemption would have sheltered $4,150 from tax in 2018. And for a family of four, the elimination of personal exemptions potentially exposes as much as $16,600 of income to tax in 2018.

Under prior law, standard deduction amounts were scheduled to be $13,000 for married couples filing jointly and surviving spouses, $9,550 for heads of households, and $6,500 for single individuals and married individuals filing separately.

The Tax Cuts and Jobs Act makes a number of changes in the rules for taxpayers who itemize deductions. For example, the new law temporarily resets the medical expense deduction limitation from 10% to 7.5% of adjusted gross income for 2018, does away with deductions for personal casualty and theft losses other than disaster losses, increases the deduction limit for some charitable contributions, bars write-offs of 2% miscellaneous itemized deductions, and eliminates the overall limit on itemized deductions.

However, two key changes are most likely to affect your clients who have claimed itemized deductions in prior years.

Mortgage interest deductions. Under prior law, taxpayers could claim a deduction for interest up to $1 million ($500,000 for married individuals filing separately) of acquisition indebtedness incurred to buy, build or substantially improve a main home and one other residence. In addition, a deduction was allowed for the interest on up to $100,000 ($50,000 for married individuals filing separately) of home equity debt.

The Tax Cuts and Jobs Act limits mortgage interest deduction to the interest on $750,000 ($375,000 for married individuals filing separately) of acquisition debt. The reduction in the dollar cap for acquisition debt does not apply to debt incurred on or before Dec. 15, 2017, or certain debt incurred pursuant to a binding contract entered into before that date.

The deduction for interest paid on home equity loans and lines of credit is eliminated, unless they are used to buy, build or substantially improve the home of the taxpayer who secures the loan. 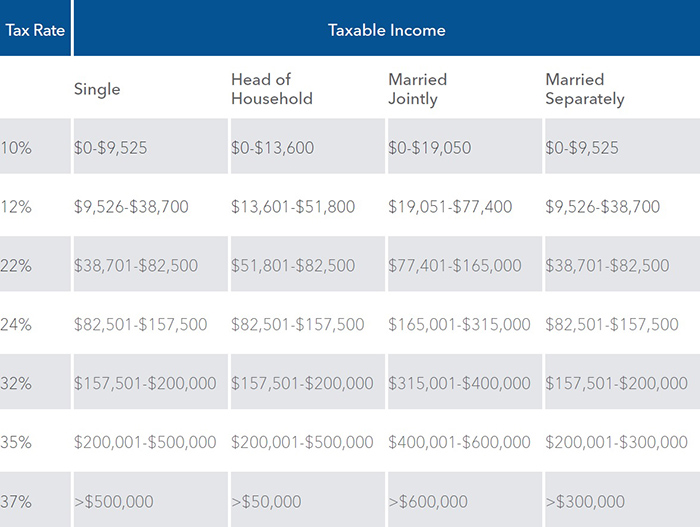 For taxpayers with children or other dependents, one of the most significant provisions in the Tax Cuts and Jobs Act may be the changes to the child tax credit. As under prior law, taxpayers can claim a child tax credit for each qualifying child under age 17.

However, the new law doubles the amount of the credit from $1,000 to $2,000 per child. For higher-income taxpayers, the new law also significantly raises the income levels at which the otherwise allowable credit is phased out. In the past, the total credit was reduced by $50 for each $1,000 (or fraction thereof) of income over $110,000 for joint filers, $75,000 for singles and heads of households, and $55,000 for married individuals filing separately. Under the new law, the reduction of the credit does not begin until income exceeds $400,000 on a joint return or $200,000 on all other returns. Up to $1,400 of credit per child is refundable for 2018.

It should be noted, however, that the new law does include one crackdown on the child tax credit. Starting in 2018, taxpayers claiming a child credit will have to show the child’s Social Security number (SSN) on the return. In the past, a taxpayer could provide another tax identification number for a child without an SSN.

New credit for other dependents. The new law creates a new $500 nonrefundable tax credit for dependents who do not qualify for the regular child tax credit, including children under 17 who do not have an SSN. The new credit is treated as part of the regular child credit in determining the amount of the credit reduction for higher-income taxpayers.

KEY POINT: Most of the new law changes for individual taxpayers are “temporary” and are scheduled to expire in 2026. But 2026 is a long way off, and it remains to be seen how the tax law will shape up by then.

The Intuit® Accountants team provides ProConnect™ Tax, Lacerte® Tax, ProSeries® Tax, and add-on software and services to enable workflow for its customers. Visit us at https://proconnect.intuit.com, or follow us on Twitter @IntuitAccts.