The following depreciation methods are available in the program: 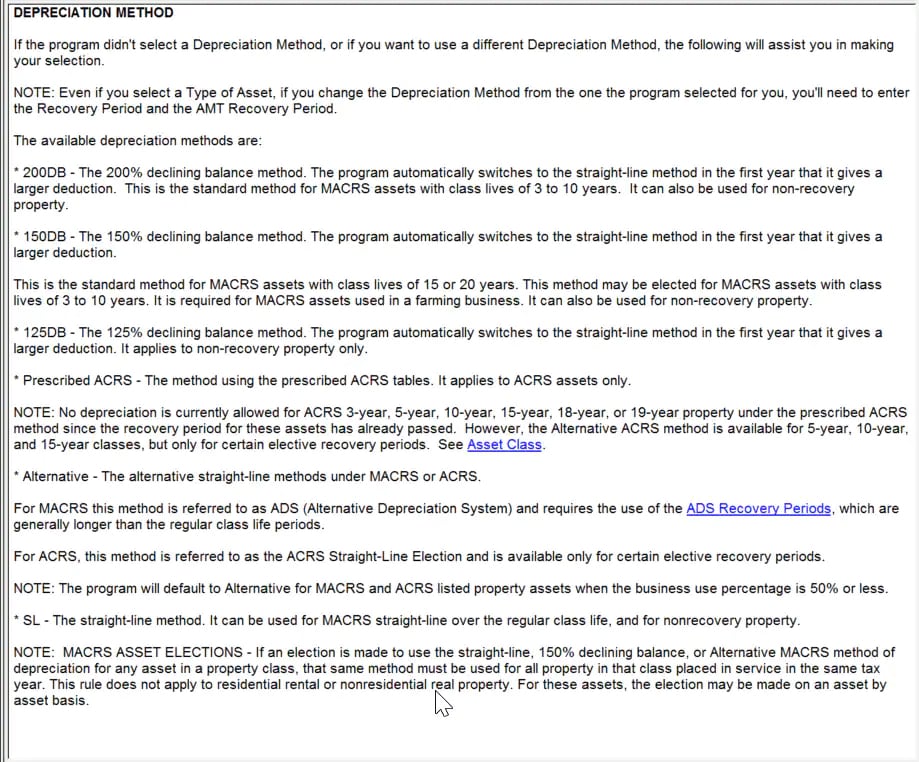 Asset elections for MACRS - If an election is made to use the straight-line, 150% declining balance, or Alternative MACRS method of depreciation for any asset in a property class, that same method must be used for all property in that class placed in service in the same tax year. This rule does not apply to residential rental or nonresidential real property. For these assets, the election may be made on an asset by asset basis.

Some of the more common ones are:

How do I depreciate an asset using the ADS over a recovery period of 40 years?

Follow these steps to depreciate an asset placed in service in the current year for a recovery period of 40 years:

Follow these steps to depreciate an asset placed in service in a prior year for a recovery period of 40 years:

There are three types of conventions. To select the correct convention, you must know the type of property and when you placed the property in service.

In determining whether the mid-quarter convention applies, do not take into account the following.

Instead of using the depreciation formula, you can use the IRS MACRS depreciation tables for an asset. On the Asset Entry Worksheet, under the Detail Asset Information section, enter an "X" in the Yes box after Use IRS Tables for MACRS Property? When you use the table, you don't reduce the basis by prior depreciation, so your entry for prior depreciation has no effect on the calculation of the current year depreciation deduction.

Once you select to use the tables, you must continue to use them for the life of the asset, unless there is an adjustment to the basis of the property for reasons other than:

Depreciation allowance, or Addition or improvement to the property that is depreciated as a separate asset.

For example, a reduction in basis due to a casualty loss would require you to stop using the tables.

Another reason that the depreciation won't match tables is if the return is for a short tax year. The relative time periods (months/quarters/half-year) shrink proportionately. An asset placed in service 02/12 would normally be considered in the second month for MM. However, if the short year started February 1, this would still be the first month for MACRS and the depreciation amount be different by the one month.

Ask questions, get answers, and join our large community of Intuit Accountants users.