Welcome back! Ask questions, get answers, and join our large community of tax professionals.
Sign In
Pivoting for Profitability. Check out our free virtual conference August 19th - 20th here.
Turn on suggestions
Showing results for
Search instead for
Did you mean:

When we log in for the first time each day to ProSeries the Letters/Invoice/Presentation/Labels automatically switch to the Microsoft Print to PDF. There is no option for our printer when we select change. We have to restart the program, then our printer automatically becomes default.

Anyone else experience this or no how to make it so our printer is always default for this? 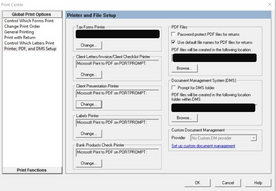 I saw someone else report this in the past, they said a Win update changed it....not sure if it was an ongoing issue for them though.

Youve checked your Windows Printer settings and the correct printer is set as the Default, right?

Im on Stand Alone and PS picks up my default printer for everything automatically....Are you on a Network Install?

Weird, I know nothing about network installs except they seem to have lots of weird issues like this!

@IntuitAustin  any words of printer wisdom to add to this?  or is the dreaded call to support in order?

@garman22  youre on a network, arent you?   Ever had any issues like this?

I am on Network but my station computer does not print. That one is only data entry.

I checked with support on this one and it doesn't seem to be something we can replicate on a mass scale. I would recommend reaching out to ProSeries Support on this. From what @Jcapriano said though, it sounded like restarting the program fixed the issue?

good luck with support. I would rather dig my eyeballs out with a spoon.

I would try local IT and see if they can fix your issue.

I'll throw in a random thought.

While the driver was downloading, I noticed that Win10 had already auto-detected the printer and set it up (presumably with some driver it found in its database or that it downloaded from the printer).  I stopped the download and went on with life.  A couple days later I noticed the windows default printer kept changing.  This ended up being two different issues.

1) Win10 has a setting somewhere that defaults to "let Windows determine my default printer."  I was able to turn that off and force a specific printer as the default.

2) The "auto-installed" driver was kinda flaky.  When the printer would go to deep sleep after inactivity, it would disappear from the computer until everything was rebooted.  I got fed up, downloaded the manufacturer's driver, deleted the "auto-installed" printer from control panel and set it up manually using the latest drivers.

Everything has worked well since (knock wood).

I think Lisa mentioned the Win10 default issue, but you might try deleting the printer and manually installing it.  Make sure you have the latest drivers from the manufacturer.

You can probably accomplish all of this while you're on hold waiting for PS tech support.