Welcome back! Ask questions, get answers, and join our large community of tax professionals.
Sign In
ProSeries Login error: "You’ll need to update your software to access your Intuit Account here" Learn More
Turn on suggestions
Showing results for
Search instead for
Did you mean:

The Renter's Refund on Form M1PR (Minnesota) is problematic.

ProSeries is now incorrectly forcing the Certificate of Rent Paid (CRP) to automatically flow to the Line 16 worksheet, which is designed for people who rent a home that they are NOT living in.  But landlords are required to issue a CRP to EACH adult in the home, including EACH spouse (and I think each adult dependent too), so the CRPs should NOT be automatically flowing there, because it gives an error saying you can't use a total of 12 months (it thinks we are saying it was used for 24 months because each spouse has one separately). 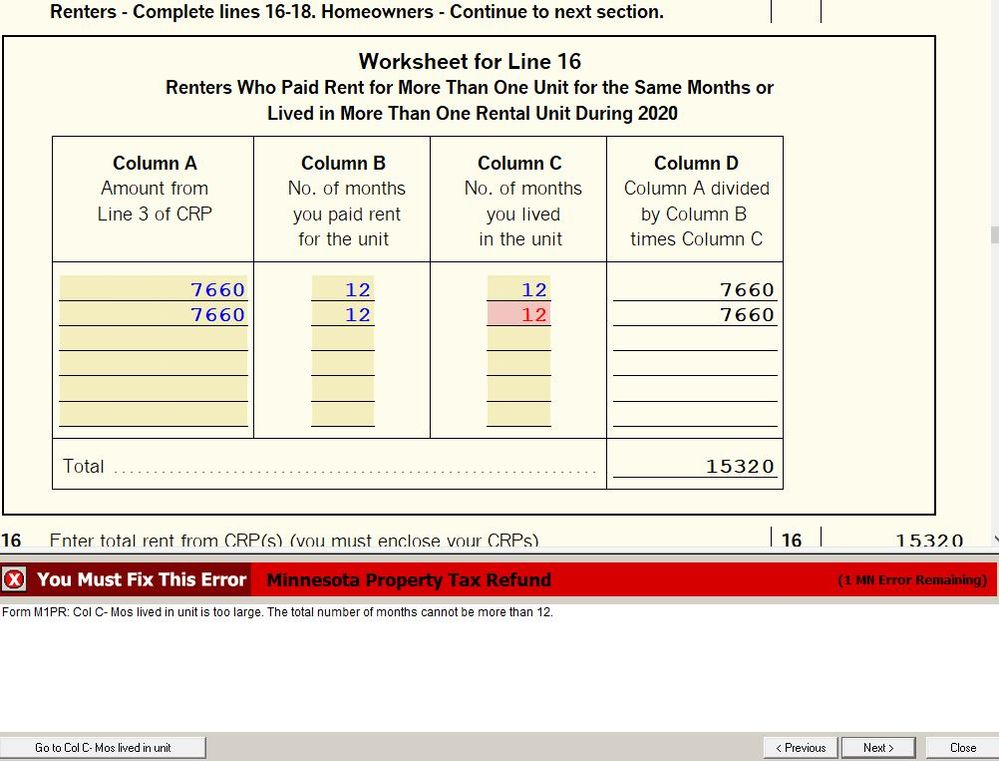 So if you enter a separate CRP for both spouses, it gives an error.  Yes, I know we can do a work-around and just combine the two amounts onto 1 CRP (well, sort of, landlords can not electronically submit CRPs, which could eventually causes a mismatch if the state starting looking at that).  But it USED to work fine in previous years, and now Intuit BROKE it.  That drives me crazy.

I am going to flag our Amazing Orlando to see if this is a "known" issue that is being worked on.

@Orlando   I would greatly appreciate it if you could check on if this error is being worked on or not.  Thank you SO much.

I got frustrated and just cheated on that the other day - I went with one taxpayer paying the rent.  At least you got Orlando on it to solve the issue.


Ukraine - hang in there
0 Cheers
Reply

Thanks for reporting the issue.  It's been communicated to the development team for review.

Thanks to both of you!

I am also getting the error the CRP form is incomplete & con not be efiled. There is no information I have not entered on the CRP form but still have the conflict with line 16 on M1PR form.

Is there an update in the works to fix this error?

@Terrin   Is there actually a credit?  It has been working fine for me.   The only time it has been giving me the error is if there is no credit (so therefore it can't be e-filed).

Yup, it’s been working for me too


Ukraine - hang in there
0 Cheers
Reply