I haven't been able to electronically file returns & extensions because ProSeries 2019 thinks it needs to be updated. Per the guidance I found online about this error with the 2018 program, I have updated, refreshed, and repaired updates both within the program and from Windows, restarted, and run error checking on the returns in question again & again, to no avail. Tech support closed at 5:00 PM yesterday my time. Today I've been on hold for almost an hour and a half. (This is my second call -- I got disconnected after holding for 30 minutes the first time.) I'm on my way to the post office to send paper extensions out via certified mail after reading that tech support put another practitioner through the steps to fix this problem and, when it didn't work, stated that they didn't know what to do about it. Like everyone else in this community, I can't afford the 8-10 hours I will have spent struggling with this issue on a regular day. But on Due Day? Sheesh, Intuit.

I've been a ProSeries customer for over 25 years, and this is a first. Looks like it's time to let some of those sales people who've been trying to convert me over to other platforms show me what they've got.

So you mention that ProSeries "thinks" it needs to be updated, does this happen when trying to file ALL clients or just one? and any particular return type or all? (I ask because we may just need to uninstall and reinstall a particular formset)

Have you tried to close ProSeries and run "refresh" updates from the start menu? Similar to this, but for the tax year 2019? 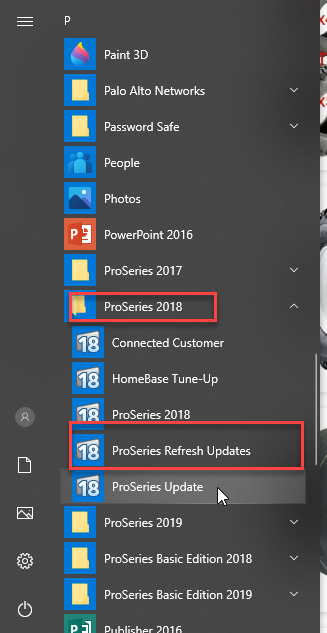 I went in my account and tried to renew thinking that it was confused with autorenew.  It still did not work.  This is happening for all my clients.  Not sure if Proconnect is working online but I am using desktop.

It was happening with a 1065 and my 1040 extensions, over and over again. I went through the steps you describe below, both from Windows (as per your illustration) and within ProSeries. I updated, restarted the system, opened the tax returns back up, ran error checking, and tried again. I was getting a message stating that I could not electronically file because I wasn't running the most current version of ProSeries, and I was prompted to do updates.

I am also disappointed.  I was first upset with clients who had 3 months to get their stuff together and now that I accepted their tax information, I expected to at least file an extension.  I tried to file the extensions last night but 4868 would not activate the efile option.  Then today my efile is grayed out and I have 25 clients to account for.  Intuit has been there for me over 20 years and this is unacceptable for the amount of money they charge for their products.

What is this resolve????

So did you run refresh updates? This form lists the location to file as the physical address indicating to physically mail the payment but it also has on the Federal Info Wksht mark on part VII, and check the box for Form 4868. You mention that the efile is grayed out, but grayed out where?

Note there is also a "form 4868 ef information worksheet"

While I completely agree it is a bummer if things were not working correctly, why on earth did YOU procrastinate for filing extensions?  You need to realize that problems can potentially happen; computer crashes, internet failures, software problems, electricity going out, medical emergencies, etc.

"...why on earth did YOU procrastinate for filing extensions..."

That's quite a jump. The "last minute" is part of the landscape in this profession. Life and a lack of understanding often get in the way of our clients getting critical information to us within a time frame that's convenient for us. One of my clients died suddenly. We were planning to file another on time, but he figured out that he needed to push an anticipated SIMPLE contribution out to October 15 (which required filing an extension). Etc. I do try to be careful not to get too big for my britches, though, so it's helpful to be reminded that there are many out there who are holier than I. Thank you for that.

But this all started the day before the last minute, when ProSeries informed me that I needed permission from "the administrator" (me) to use the program. It offered to send me an e-mail asking me to authorize myself, then generated an error when I said okay. After trying again a couple of times, I signed in to the Proseries website, which showed (erroneously) that I hadn't renewed my software, although I had already used it to file several returns. From within the ProSeries website, I tried to figure out how to authorize myself to use my software, to no avail. I did try to call tech support, but decided to try to solve the problem myself rather than waiting "greater than one hour". After groping around some more, I finally found that although I had been fed an error code when I accepted the invitation to authorize myself, an e-mail had in fact been sent, which had been captured by my spam filter. Aha, I thought, on my way at last!

When I attempted to do my remaining e-filing (again, on on the day before the last minute), I came up with the message that I did not have the latest version of ProSeries. I went through the steps that were recommended in the error message, tried again, no love. I searched around the web for an answer and found the same process recommended by the Intuit rep on this thread.  As described above, I went through several rounds of updating, refreshing updates, & repairing updates as shown on the rep's post, both in the Windows menu and within the program, shutting down, reopening the program, opening the returns I was trying to send, error checking, closing them, etc. Same issue: You can't e-file because your version of Proseries isn't current. I checked the program alerts for something that might help me. Nothing. And by that time tech support was closed.

If July 14 had gone as planned, I would have been done with my tax prep obligations for the week. I had billable opportunities scheduled on July 15, which I lost out on because I had to spend the day dealing with this. I would have been fine with an alert from Intuit saying, "Some users have been unable to e-file because the updated program still thinks it needs to be updated, and in some cases we haven't been able to figure out why. If the steps we've posted don't resolve your problem, you may have to file extensions on paper. Chances are high that you're not going to be able to get through to tech support in time to resolve the issue and allow you to meet your deadlines. We'll give you a letter for IRS and your clients for whom you were supposed to send electronic payments, explaining what happened. That way you'll have a tool to aid you during the coming unbillable weeks you're going to be spending begging them for clemency."

Instead I thrashed around for hours hoping for a solution that wasn't going to be forthcoming. I'm lucky that none of these extensions were supposed to have payments attached; it appears that there are others who aren't so fortunate.

And the idea that practitioners share the responsibility for the failure of a software tool for which they pay hundreds or thousands of dollars to be there for them (yep, right up until the last minute)? Sorry, no sale.

I opened up ProSeries this afternoon, getting ready to call tech support about the 1065 returns that wouldn't e-file yesterday. I tried e-filing them to see what would happen & they transmitted to Intuit's server in a heartbeat, no problems.